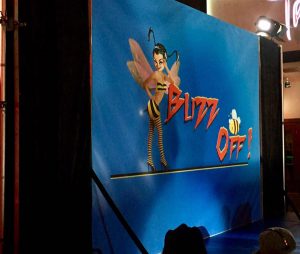 January 19, 2017 – Starr was recently hired to design two stages for a new ABC pilot called Bringing It to the Streets. The show was created by Chris Bearde, who is most famous for creating The Gong Show which ran on NBC from 1976 until 1980. The pilot is produced by Dick Clark Productions and Vin Di Bona / Fish Bowl Worldwide Media (America’s Funniest Home Videos, Entertainment Tonight, and  MacGyver).

Bringing It to the Streets is a hour long talent-based reality show divided into four segments (of 15 minutes each). As the pilot was filmed in Las Vegas, two of the segments were filmed on stage at a theater at a Vegas casino. The other two segments were filmed downtown on famed Freemont Street. Starr designed a unique stage for each of the two exterior seqments.

One of the segments titled “Buzz Off”, features a 14 foot diameter turntable with a wall in the center that allows one variety act to perform while a second act sets up behind the wall. When the first act finishes or is “buzzed off”, the turntable will rotate the next act in front of the waiting judges.

Starr’s second stage design is for a segment called “Joke Jockey”. This stage features three racehorses on tracks that move them across the stage to a finish line. On the back of each horse rides a comedian, that tells jokes. As the audience applauds louder, their applause moves the horse closer to the finish line.

The Bringing It To The Streets pilot is for a proposed series scheduled for summer 2017.

Around The World With Starr

Check Out Starr’s Latest Adventures Around The Globe…!

A Closer Look At Starr’s Backdrops For Kevin Hart

Kevin Hart’s is one of the world’s biggest stars. His movies gross millions, as well as his successful live concert tours. In fact, his 2015-2016 What Now? Tour was the 12th highest grossing concert tour […]

May 4, 2016 – Starr is proud to announce a new collaboration with country superstars Little Texas and Nashville recording artist Andy Ross, for their Back On The Backroads 2016 Tour. This marks the third […]